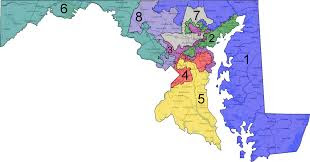 One of my top priories is non-partisan Congressional and Legislative redistricting.  As matter of fact, I feel so strongly about ending gerrymandering that I was a named complainant with fellow Delegate Neil Parrott and Former Ambassador Ellen Sauerbrey in a Judicial Watch case.  Unfortunately, our case did not make it to the Supreme Court, however another did.

The Supreme Court is set to consider Maryland’s gerrymandering case that has been making its way through the court system.

Maryland’s case, Benisek v. Lamone stems from Maryland Democrats' redrawing of the boundaries for the 6th congressional district in 2011. Former Republican Rep. Roscoe Bartlett had represented the region starting in 1993 until Democrat John Delaney picked it up as a result of the redrawn district, which added part of liberal Montgomery County to the conservative Western Maryland district.

“The case is based on the contention that the state violated the First Amendment's prohibition against retaliating against an individual because of his or her speech or conduct. The voters argue that Republicans in the 6th District were penalized because of how they cast their ballots.”- Balt. Sun, Dec. 8, 2014

Maryland’s case is the second gerrymandering case taken up by the Supreme Court. In October of this year, the Justices heard arguments on Gill v. Whitford, a case from Wisconsin in which a lower court ruled that State Republicans drew a map so partisan that it violated the first amendment rights and equal protection of democrat voters.

In the past, the Supreme Court has maintained that it should not get involved in state cases of political gerrymandering, though it has intervened in cases where district maps have been drawn to suppress racial minority votes.

Justice Anthony Kennedy and Chief Justice John Roberts both raised questions about the justices' ability to resolve political gerrymandering disputes. The court has never thrown out a politically gerrymandered district, as the US Constitution does not explicitly say how districts should be drawn. Maryland’s Constitution lays out guidelines in Art. 3, Sec. 4:

“Each legislative district shall consist of adjoining territory, be compact in form, and of a substantially equal population. Due regard shall be given to natural boundaries and the boundaries of political subdivisions.”

Four Justices, including Justice Clarence Thomas, have said that it is not within the Supreme Court’s purview to decide such cases.