We have had a few significant legislative items that I wanted to make you aware of:

It removes many requirements to grant in-state tuition rates to illegal aliens:

Removing the requirement that an individual receives an associate's degree or 60 credits at a community college before receiving in-state tuition at a public four-year institution. Extends from 4 to 6 years the time by which an individual must register as an entering student after graduating from high school. Reduces the amount of time an individual must have attended a high school in Maryland from 3 years to any amount of time. It alters the period from which the dreamer or dreamer's parents filed a Maryland income tax return from 3 years to the prior calendar year.

Once again, we have legislation that targets gun owners who are not committing gun crimes. The majority of cases overturned or modified by the Handgun Permit Review Board was modifications of restrictions on permits. These are cases in which the Maryland State Police had already determined the applicants—all law-abiding Citizens—do not have any criminal nor mental health factors in their background. The handgun review board has been responsible for 27,396 permits, and not a single one of those people have committed a crime. These are not the people we need to focus our attention on. Our efforts would be better focused on criminals who use guns to commit crimes.

I stood with the Governor and lawful gun owners of Maryland and voted to sustain the veto.  Democrats in the House unilaterally overrode the Governor's veto, and now the bill will become law. 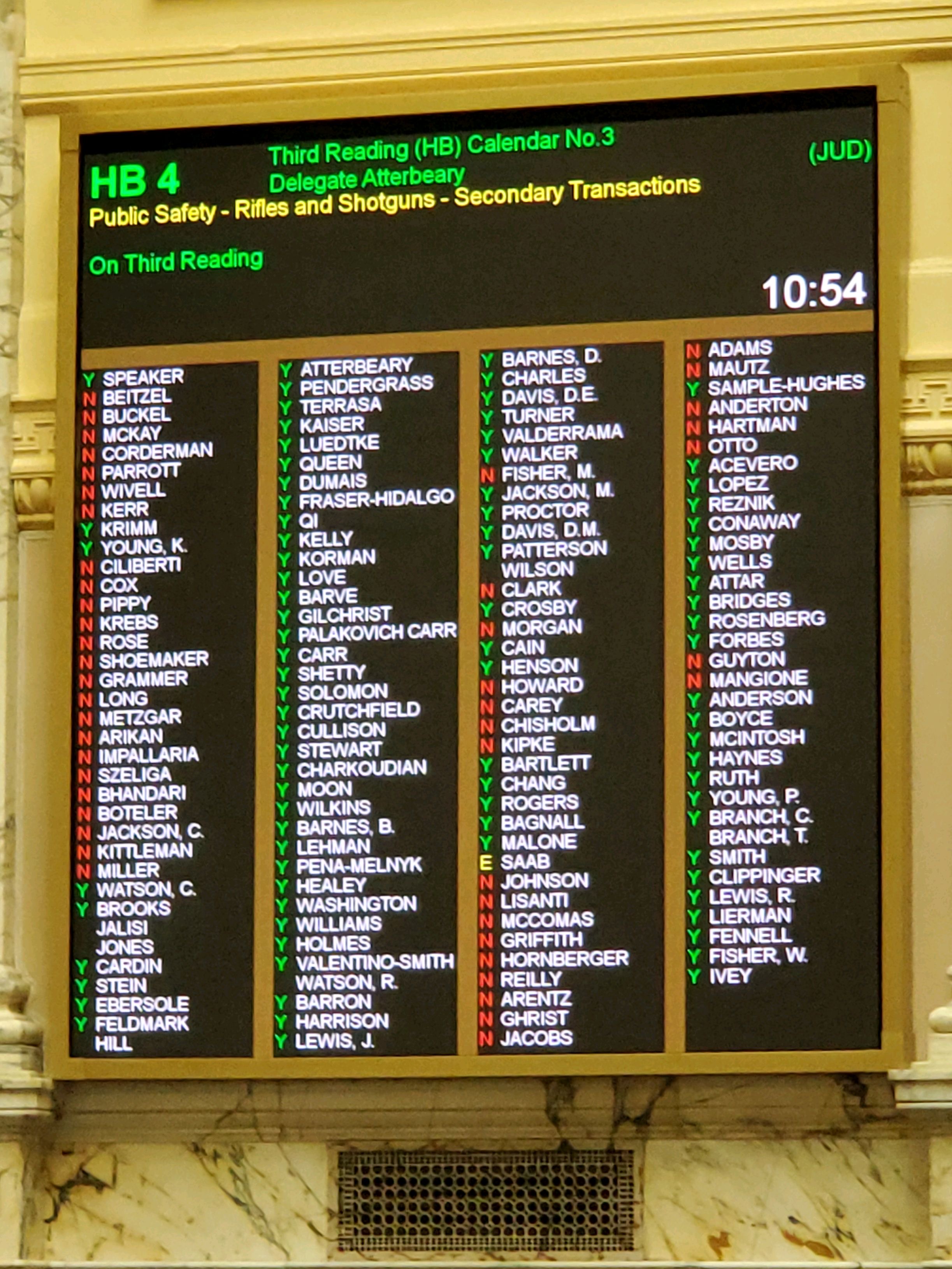 HB4- banning private sales of rifles has advanced in the House.

The House Republicans called on the Democratic Majority in the General Assembly to put forward serious solutions to address the violent crime crisis in Maryland. Instead of facing reality and the clear statistical facts of the problem, they have thrown their support behind House Bill 4, a bill that targets lawful gun owners rather than illegal guns and those who use them to commit violent crimes.
Moms Demand Action appeared in Annapolis to advocate for this bill saying, "Even if it doesn't do much, we need to pass it anyway, what's wrong with adding one more step to buying a gun?" The fact that when this bill does not deliver on the promise to stop gun crimes, these activists will be back to demand even more regulations on peaceful gun owners who aren't committing the crimes.

The bill passed the House yesterday and moved to the Senate.  To follow this bill and see the amendments that were offered, and rejected click here.

HB 231- forces Section 8 expansion and is a gross violation of individual property rights.

Strike 2 – Because it forces property owners into a contract, some small and new property investors will undoubtedly elect to sell their homes instead of renting. This will impact the supply of homes available for rent and less supply always causes prices to increase. Literally, this is the definition of unaffordable housing policy.

Strike 3 – it gives tenants on a section 8 voucher more rights and services than those who are not. One example is the landlord is required to have a professional government inspection performed annually. No other tenant without a voucher would receive such a service, especially for free. Another example is that the landlord is required to take the home off the market while the Housing Authority processes the section 8 voucher lease agreement. Experts testified this process could take from two to six weeks. During that time of the property is off the market, the property owner has to eat those costs.

The most concerning thing to me is that we used to talk about taxpayer provided programs as a stop gap “ safety net” to help people during times of personal crisis, it was never intended to provide generational benefits to able-bodied people at the taxpayer’s expense. It is not the taxpayer's responsibility to provide what able-bodied people should be providing for themselves. In St. Mary's county, there are over 1,200 Section 8 voucher recipients, and the waiting list is eight years long. Safety nets, such as housing assistance, was never meant to be a permanent solution.